A post shared by Alice M Krieg & Carmen Devito (@wedigplants_groundworksgardens) on Oct 8, 2016 at 9:29am PDT

A few months ago my friend Alice of Groundworks posted on Instagram about a cotton plant she had successfully grown in Brooklyn.

This will be a fun small project! #handspun #cotton spun right off the seed with my #bookcharka for @groundworksgardensnyc from the cotton plant they grew!

I offered to spin it, she accepted, and asked if I would be able to incorporate her cotton into a handwoven piece as a gift for her business partner. We agreed on a design for an overshot table runner (the draft is “Ferns and Flowers” from Bertha Gray Hayes,) and I got started.

I picked out the seeds and carded it on cotton cards…

and spun the cotton on my charka.

Here is the small skein of cotton that resulted

I used commercial cotton for the bulk of the project, and was able to buy navy in the weight I wanted, but was unable to find the particular green and red-violet that I wanted, so I dyed those two colors. The small skein of white handspun was used as inlay in a couple of the overshot motifs, and as a stripe at one end of the runner.

Loom warped, and a few inches of sampling before the main project… 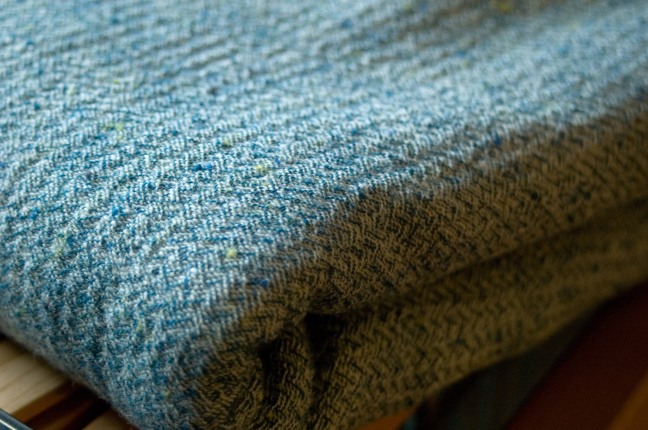 I had the weft yarn for my Slow Cloth yardage project all sorted out, now I needed warp. I was not in the mood to dye and blend another pound of fleece, so I left it natural. My strategy was simple: I’d card and spin about 12 oz of singles, measure the yardage, and see how long a warp I could make with it. I was hoping for at least 6-7 yards, at about 20″ wide.  I just wanted plain yardage, so no fancy patterns. I went with a basic broken twill and used this draft from Handweaving.net, only without the warp stripes.

It all started off well enough. I sized and blocked my singles, and wound them onto cardboard storage spools when they were dry in preparation for warping. I used the Ashenhurst Rule for determining sett, as I did not feel like measuring WPI on 4800 YPP singles. I had a starting sett of 27 EPI, and I would warp Back to Front for a change. For some reason I ended up with a five yard warp, where I had hoped for at least seven. I chalked it up to lack of experience, and start winding my warp. After I finished winding the whole warp I discovered 4 more skeins of spun warp yarn that had fallen behind the loom before I did my warp calculations. Now I understood why my warp ended up so short – I was missing about 1400 yards 😦

I had two choices. I could carefully unwind everything back onto spools, recalculate the length with the additional skeins, and start all over again, or I could keep the warp at its current length, and just make it a little wider than I’d planned. It had taken me four days to wind this warp. I went with option B.

I figured there was no need to actually count anything while I was winding the extra warp.  After all, I was threading in a straight draw and didn’t have any complicated threading sequences to keep track of.

I’m sure you can see where this is heading.

I took the warp chains to the loom and started spreading them in the raddle. It did not take long to see that I had 38″ of warp on a 26″ loom. This was not going to work. I tried changing my sett to 32, but even that wasn’t enough. In the end I left it at 32 EPI and pulled out the extra ends, setting the unused warp chains aside. Oh, and somewhere in all the rearranging of warp in the raddle I lost my cross.

I finally got it all beamed and threaded, but it was not a nice, neat, orderly warp.  It wasn’t really tangled, but there were a lot of places where sectionsof warp were crossing over each other. This, combined with the new closer sett, made the warp Very Sticky.  A warp of close-sett, semi-woolen-spun wool singles is sticky. Who’d’a thunk it (please apply sarcasm font.) Every time I changed sheds I had to manually clear the warp and make sure none of the threads were sticking together.  Every. Single. Shed. It’s impossible to develop any speed or rhythm when working like this

I did eventually finish.  It took me three months.  I’m reasonably happy with the fabric, even though it’s more warp faced than I’d pictured.  The warp stripe draft gives it a very subtly ribbed texture at this sett, as seen in the photo at the top of this post.

So what happened to the rest of that warp yarn, you ask?  When I was done with this piece of yardage I cut it off, and tied the remaining warp onto the center section.  I re-sleyed at my originally intended 27 EPI, giving me the more balanced twill I’d been hoping for.  I got another four yards of fabric, at just under 8″ wide.  This one was much faster to weave off, as the warp was beamed more evenly, and the wider sett meant no more manual clearing of sheds.

More #handspun #handwoven #yardage, this time at a looser sett, so it's less warp-faced. #slowcloth

It will make nice facings, and maybe a small bag or two.

A couple of years ago I set a personal challenge to make at least one complete outfit entirely from fabric that I had spun, woven, and sewn myself.  This is where that project starts.

When I was a relatively new spinner I made a common newbie mistake, and treated a raw fleece I was washing a little too impatiently.  It wasn’t a total disaster, but there was a little  felting on the cut ends.

I did what I usually do when I want a “solid”color, which is to dye the fleece in a selection of my base colors, then blend them on the drum carder.  Unfortunately I also chose this fiber-blending project to try using a swing picker for the first time.  It was not, on the whole, what I had expected.  The picker only exacerbated the problem, tearing the fiber where the ends had felted together.  I had also not done a good enough job removing the second cuts from the fleece.  The result was a fairly neppy batt. I was not about to let that stop me.  I found I liked the tweedy pops of color that the neps made, so I decided to think of it as a “design element” and called it good.

I let those batts sit for a number of years as Life happened.  When I decided to start this project I realized these neppy, tweedy batts would be perfect for plain twill yardage. I spun a bit over 11 oz of wool into a bit over 3000 yards of singles at roughly 4500 yards per pound – about the size of heavy-duty sewing thread.

This was the easy part.  Next I had to spin enough similar yarn for warp!

Handspun Yarn in Magenta and Pistachio